Skip to content
The Dangers of False Employee Engagement

The Dangers of False Employee Engagement

Since my last article on employee engagement, people have asked me, “Why is it such a big deal to measure engagement the way that researchers do?” “What’s the harm in companies defining it anyway they like?”

To answer these questions, we need a bit of history. The modern take on engagement began with William Kahn in 1990 and was later fine-tuned by researchers such as Wilmar Schaufeli and Arnold Bakker. While there are minor quibbles among researchers, engagement is typically viewed as having cognitive aspects, such as attention (“I concentrate a great deal on my work”) and absorption (“Time flies on my job”), and emotional elements, such as energy or vigour (“I feel energetic when doing my job”). Some researchers add physical (“I really ‘throw’ myself into my job”) and dedication components.

Unfortunately, the ‘word’ engagement was quickly lifted by the consulting industry and applied to many other things. As a result, many commercial engagement surveys don’t measure engagement. Instead, they re-package old things as engagement (i.e., jingle fallacy), or confuse it with its drivers (e.g., having a best friend at work) or other employee outcomes (e.g., positive affect, satisfaction, commitment, effort/striving, stay intentions).

Some survey vendors claim that these things are part of engagement. Yet, over 100 peer-reviewed research studies, using mathematical modeling, have shown these things to be separate from engagement as described above. Here is a meta-analysis of 90 studies.

Hence, we arrive at Irony #1: Employee engagement was passed over in favour of the word used to describe it, which was then applied to things that we already knew about, and were already measuring.

This isn’t a big deal, until we come to Irony #2: Real, or science-based engagement often has bigger impacts on organizations than other variables that are labelled engagement.

For example, providing engaging work is a powerful way of getting satisfied and committed employees (here and here) and retaining them (here and here). My recent review of many studies also found that engaged employees are healthier than other employees. They’re also higher-performing, as shown in multiple studies (here and here). Finally, increases in engagement predict both customer loyalty and financial returns. This is all based on science-based engagement.

If you truly want the benefits of an engaged workforce, you first have to measure it the same way that researchers do. If you don’t, you’re promoting other good things, which is nice, but those other things aren’t as impactful.

Irony #3: If you make organizational change decisions based on false engagement survey results, you could be wasting money on null or harmful impacts on the organization.

To illustrate, I administered an employee survey to American and Canadian samples for a study. It included the Schaufeli and Bakker measures of science-based engagement. It also included many variables that are often confused with engagement. I then created false engagement indices based on definitions of engagement used by 13 leading consulting firms and survey vendors.

The results? First, the false engagement measures overlapped only 26% with science-based measures in statistical variance, suggesting that nearly 75% of science-based engagement is missed by commercial surveys. 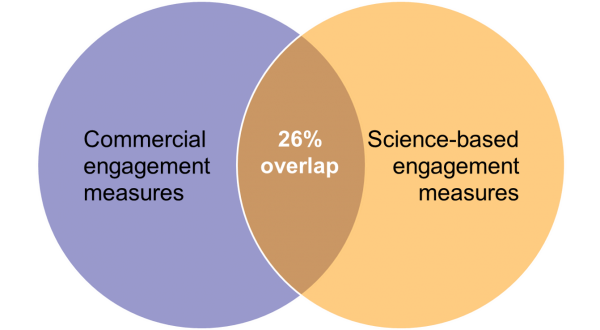 In fact, when organizations identify drivers of false engagement from survey results, they’re likely to misidentify the drivers of science-based engagement over 80% of the time.

A Top 3 driver of real engagement was missed up to 55% of the time.

A Top 5 driver of real engagement was missed up to 82% of the time.

The #1 driver of real engagement was missed 100% of the time.

In summary, leaders that use science-based engagement surveys are able to identify and improve the things that most drive real engagement. From that, they’ll benefit from the stronger impacts of a truly-engaged workforce. They’ll also avoid wasting time, money, and effort to change the wrong things.